Wow, just wow! I do not know where to start. Seriously I had an amazing non-stop weekend full of learning new sewing techniques, making friends and seeing some of LA.

I guess I’ll start at the beginning, I arrived in LA around 10am along with 3 other Darlings who happened to be on my flight. After going our separate ways I meet up with my roomie, @sewmuchtoy and we headed over to the JW Marriott at LA Live where the conference was being held. Since I didn’t have to report for the Fashion Show until 5, we talked and rested a while before deciding to grab something to eat. Later we made a quick run to Target before heading back to the hotel. After a stressful experience of being locked out of our room for about 30 minutes I rushed to get ready for the fashion show.

The Fashion Show was a new addition to the Conference and I hope they do it every year. Each participant was allowed to submit two looks using any of Mimi G’s Simplicity patterns, free or paid tutorials as at least a base. Creativity was encouraged and boy was it delivered. Kelly (Mimi’s right hand girl) and Candice (Mimi’s good friend and volunteer) had their hands full with all of us, LOL, but they got us in our runway order. Mimi gave us a quick lesson on how to walk the runway and let us know she was excited to see our creations. She shared with us that we would be judged by 3 judges; Norris Ford on creativity and fashion foward, Tieko Niejon on style and owning the look and Deborah on construction and fit. 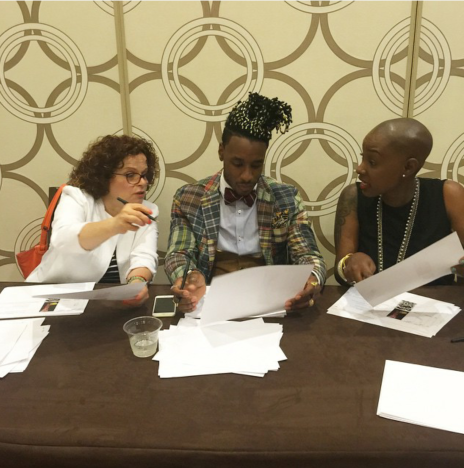 Before having to get dressed we had a moment to enjoy the cocktail hour with the fashion show attendees. We had a blast behind the scenes! We laughed, joked, complimented each other, took dozens of pics and swapped pattern numbers and project ideas. Though I’m sure each of us would have loved to win, we were truly just happy that our projects had come together and we had this opportunity to strut our stuff.

Cocktail Hour before the Show. I was so happy to meet @stylesewme 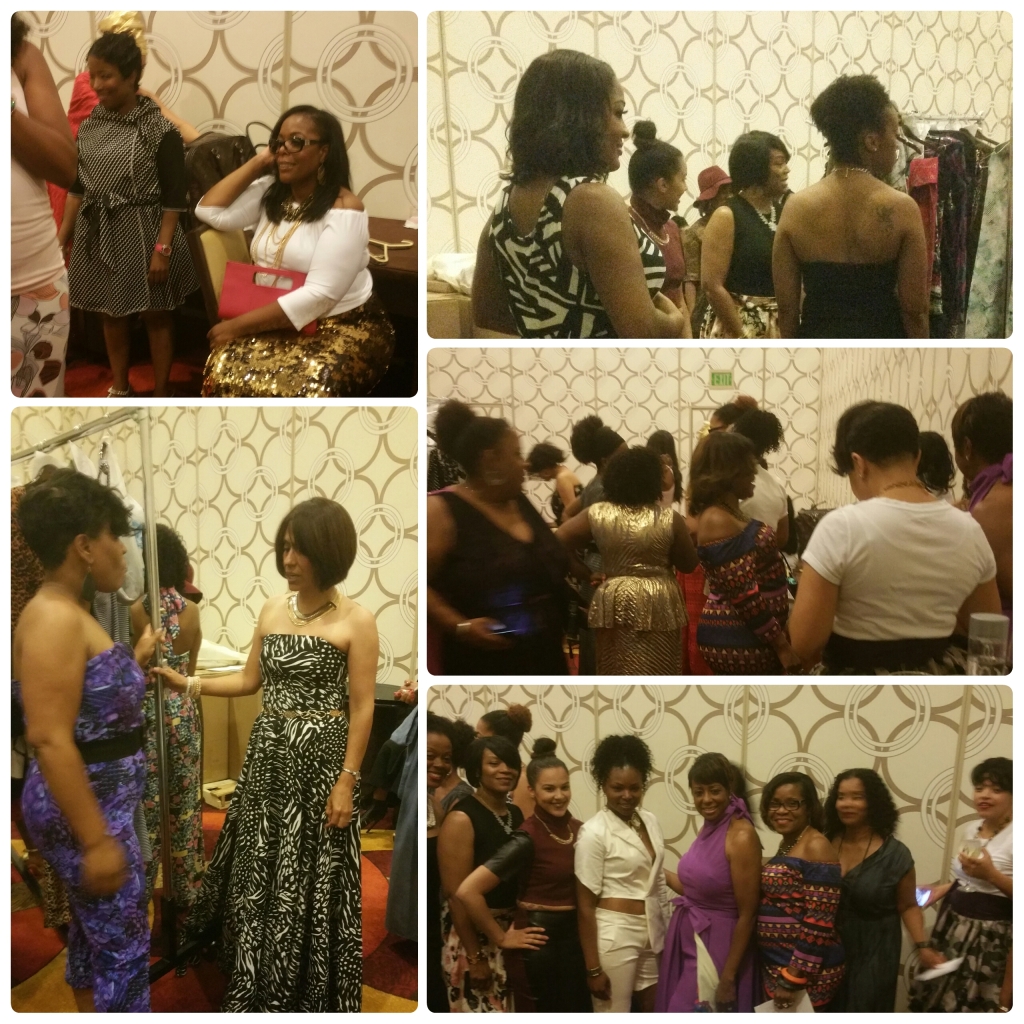 Behind the scenes of the fashion show

Despite some initial nervousness of some, I believe everyone had an excellent time. I was amazed by the creativeness of these ladies.  Everyone had their own approach, some followed the patterns or tutorials and were creative with their fabric choice, others mixed two or three to achieve a totally different look, and several added their own flair to modify one of her existing patterns. 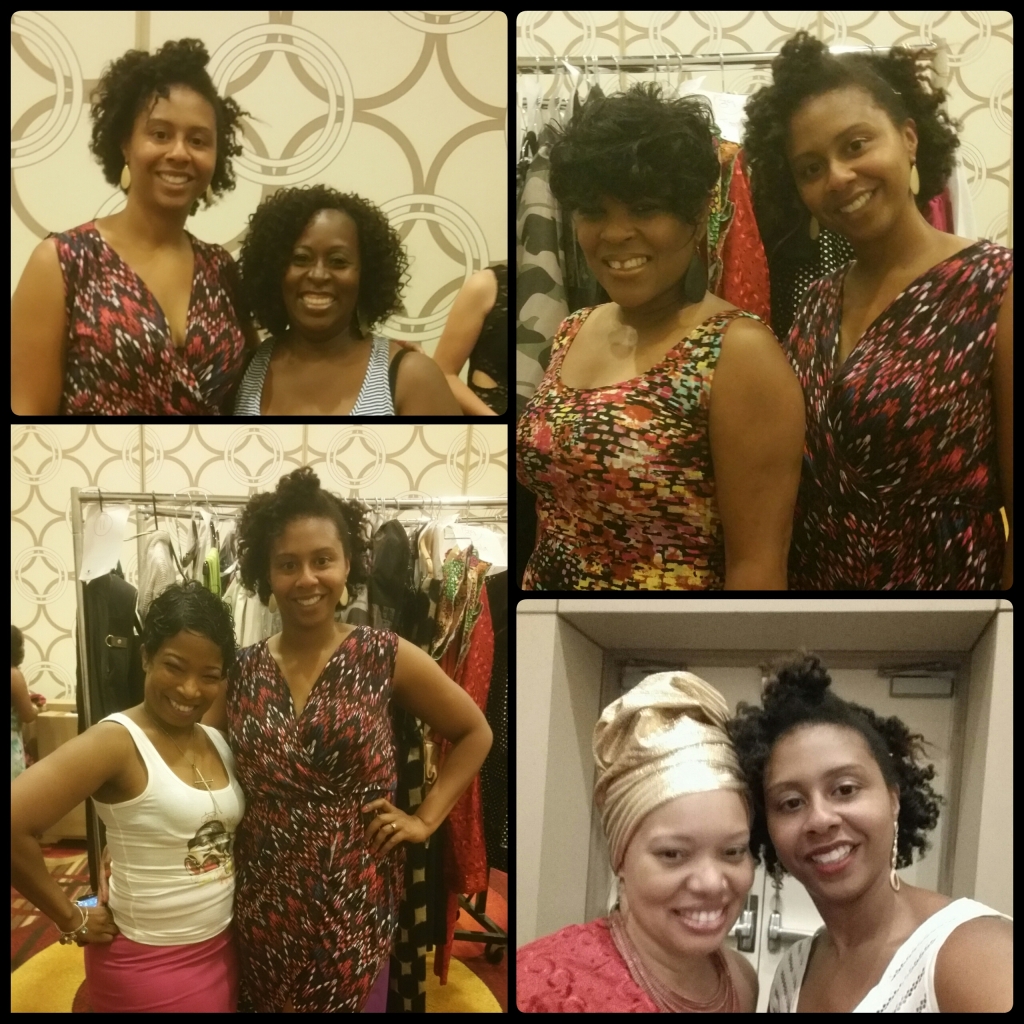 I chose to submit two looks. One was the Floor Length Duster (I’ve already reviewed here) from the free tutorials from her collaboration with Michael Levine which is based on the cardigan from New Look 6735. The second was a labor of love (and at some moments – hate). I was inspired by a dress that I saw on Facebook months ago.The fashion show was the perfect excuse to finally take a stab at it. I initially planned to loosely create this look by simply making a Circle Skirt following Mimi G’s free youtube tutorial and wearing it over a white ponte version of the Off the Shoulder Midi Dress. However another Darling convinced me to go all out and also recreate a full eyelet dress. I created the front bodice using Simplicity 1325 (I raised the V neck). I wanted an open back and didn’t have a pattern for one so I used the back bodice pattern piece of the same pattern but slashed it at an angle. I used Mimi’s Simplicity Swimsuit pattern (S1116) as for the underlying, minus the flounce. Bias tape was used to finish the neck and armholes and also the back skirt but chose to keep the hem raw. I realized after the show that I did not get a good pic of me in either look, maybe someone else did and will share it with me, so I can show you an old pic of NL6735 and a group pic of me in the second look. I really enjoyed the fashion show, after shaking off my nerves it was a blast, by the second walk I was into it.  Though I definitely wanted to win (I’m competitive that way) the experience was wonderful no matter the outcome.

I was blown away by so many looks, some sadly I didn’t get a picture of (including my own). One of my favorite looks, that I did snap a pic of, was this purple jumpsuit by Constance. She created this amazing look by blending multiple patterns together. Simplicity 1159 was used for the halter bodice but instead of the skirt she attached it to the pants of Simplicity 1115. Just that combo would have been gorgeous but she took it one step further by adding a pleated overskirt, but she still wasn’t done. During her walk she reversed the overskirt to reveal the beautiful gathered butterfly print reverse side. AMAZING! You can find her on Instagram @ckfcreate

Another two in one look was created by Sharon who also had a unique version of a jumpsuit. I believe she used Mimi’s Strapless Jumper tutorial as her base but added her own flair by attaching a short train that could be pulled over her shoulders as a built in shawl. INGENIOUS!!!! Did I mention how yummy this fabric is?! I love it. Check out more of her creations on IG @naturalgurlygirl

Left- train down, Right – Train folded up as a shrug

Another outfit that stood out was this bright red two piece outfit made of African lace. She used the bodice of Mimi’s Simplicity 1115 jumpsuit with the over-sleeve to create a crop top and paired it with a maxi skirt.

There were so many others including the winner and the runner up seen below with Constance who won third place from above. The winner of $500 cash paired the crop top from Simplicity 1283 and the Regal Maxi skirt using vintage fabric. The second place winner received a $200 gift card to Michael Levine for her perfectly fitted dress. She paired the bodice of the Simplicity 1115 jumpsuit with a full skirt. Coming in third was Constance, I believe she received $100 cash.

The only downfall in participating in the fashion show was that I didn’t get to watch the fashion show. It looked (from what I could see while trying to focus on not tripping) like the audience was enjoying the show as much as we were. They gave us great energy that boosted our confidence with every step. I heard thunderous applause, several “She did that!” and “YASSSS” from the lobby and even snuck a glimpse of a standing ovation when Lawana removed her hoodie to show a bathing suit.

It was a fun night and a great way to kick off the conference. It was quite an icebreaker. Afterwards a few of us headed over to a nearby restaurant to talk and refuel. It was a long jam-packed but wonderful day and start to the conference.