I’m not sure why I’ve never shared my love of concerts (and really live music in general) here on the blog, I guess because I wanted to keep everything sewing related. But since I made a brand new outfit for this show (will post that tomorrow) I’m going to share this post about my On the Run experience as well.

First of all I am definitely a a Beyonce fan!  Her work ethic is amazing and that’s really what I admire most. She knows what she wants and she makes it happen. She can also sing her arse off – FIGHT ME! – and she does it while dancing…for two hours. Simply amazing! I have never been disappointed in a Beyonce show/performance and I’ve seen her live four times; The Destiny Fulfilled Tour, The Beyonce Experience (where I met her in a meet and greet), the Formation World Tour and the first On The Run Tour.

I love Bey but, I’ve actually been a fan of Jay-Z’s longer, going back to Reasonable Doubt. I’ve seen him in concert more times as well (five to be exact);  Heart of the City Tour (w/Mary J Blige), Watch the Throne Tour (w/Kanye), Magna Carter World Tour, 4:44 Tour and the first On the Run Tour! There would be one more but that show was canceled due to thunderstorms (it was a amphitheater). He is also amazing live, though I can easily say Magna Carter was my least favorite.

Thankfully my hubby is a music fan too (even though I went to most of the above shows solo, prior to being married) so it was a no-brainer that we were attending this sequel tour.

The Carter owe us nothing! NOTHING!!! The show was worth every penny! We attended the Saturday show and I somewhat seriously considered grabbing tix for the Sunday show just to see it again. It was that good. Neither my hubby nor I could imagine how they could possibly top On the Run or either of their last solo tours, but somehow they did. The stage set up, the lighting, the video montages, the choreography, the song transitions, the dancers, the story…EVERYTHING was exceptional.

Chloe x Halle were the opening act and they started right around 7:30. I’ll admit I haven’t given Chole x Halle a true listen, I like them on grown-ish and I know they are Beyonce’s proteges, but that’s about it. Their vocals were great and they had a great energy on stage, especially as the opening act that usually no one is checking for. I will be giving them a sincere listen soon.

Up next was DJ Khaled. My hubby isn’t a huge fan, insisting he never plays enough of any one song for him to enjoy his set. Khaled played some hits to get the crowd warmed up and then of course – this being ATL- he brought out some special guests. First up was Monica, an ATL favorite, who performed So Gone through some mic troubles. Then he brought King Combs (Diddy’s son), Freeway and Lil Yachty. Cee-Lo performed a decent length medley of his top hits including Crazy. Ludacris and Jermaine Dupri finished off Khaled’s set with Welcome to ATL and MOVE which got the crowd hype! This may have been the first time I felt the stadium shake!

After a short intermission the lights went down at exactly eight minutes to 9pm and everyone scrambled back to their seats as the show began. My hubby shot me a look that I knew meant “awww ishhhh” because he had predicted they’d start at 9:30. He knew that a pre 9pm start meant this was about to be one hell of a show! The opening video, which was about 2min long (I know because I recorded it) was composed of beautifully shot images of Bey and Jay in various tropical locations, in a chapel, in a reggae hall and in a cheap hotel room covered in cash. The last shot was each of them holding a set of twins (though they are not Rumi and Sir). The show opener was Holy Grail and it was a non-stop 2.5 hour musical experience after that!

Cramming the hits of 2 mega stars that have 19 solo and one joint albums between them into a two and a half hour show is no small feat! The mixes and transitions were seamless and creative and I’d venture to guess that most peoples favorites made the cut. The pair performed some of their most recent collabs like Nice, Black Effect and of course Apeshit, as well as, oldie but goodies Bonnie and Clyde, On the Run and Deja Vu. Plus many their individual hits from Crazy in Love and Big Pimpin to Sorry and The Story of OJ.  I counted six Beyonce outfits and Jay switched it up almost as many times. During each change of costumes or sets the nearly sold out Mercedes Benz Stadium crowd was kept engaged by either dancers, musician solos or a video.

The stage set up was amazing! A massive screen that seemed to be three screens in one slide open and closed throughout the show to revel a tic-tac-toe like structure that served as a multilevel area for the multiple musicians and dancers through out the evening. This enormous screen is what makes concerts possible in a stadium as large as Mercedes-Benz. There was an lift that carried the stars from the top level down to the main stage and side stairs that the disappeared into. A runway on each side allowed them both to come out further into the crowd, Beyonce at one point was levitated from one runway to perform Drunk in Love. I can’t leave out the center stage that literally raised up and over the VIP floor section moving the artists the back of the floor area to perform Formation, Forever Young, Who Run the World and Apeshit. 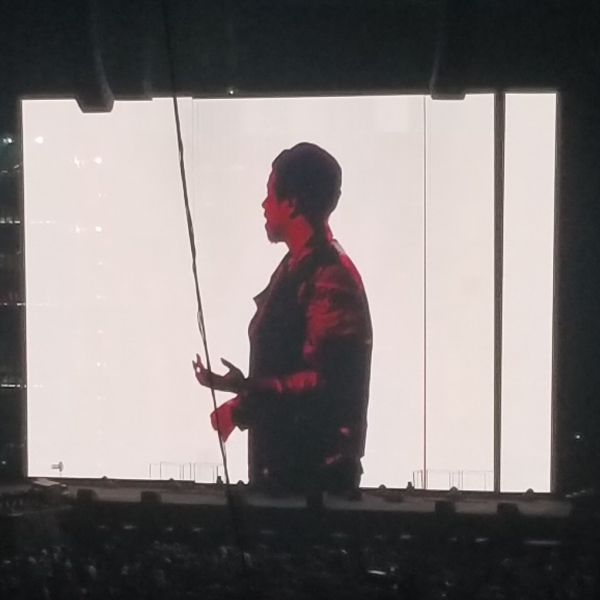 Personal highlights for me included when Beyonce was leading in to the swag surf transition and said “I’ve been waiting to do this in Atlanta“, Nice, Freedom, PSA and N*ggas in Paris. If you’ve never seen/heard N*ggas in Paris live, it’s an experience! I was at the Watch the Throne Tour in Atlanta (which was the tour opener) when he and Kanye performed it together and the crowd went…well Apeshit! I think they started the song over no less that 3 times, maybe 5 and each time it was the like the first. Now, seven years later, sans Kanye, this song still had the entire stadium on their feet. I definitely felt the stadium vibrate under my feet during this part.

For those who wonder why concert tickets hit 3-digit prices, this is why! There is a lot of technology, equipment and crew necessary to put on a show of this caliber. Same goes for Justin Timberlake who is amazing (his 20/20 experience and Man of the Woods tours were beyond great) and Bruno Mars who I’ll see later this year. 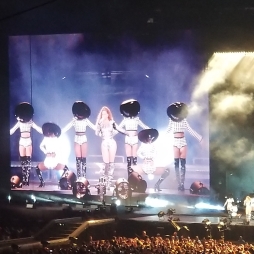 And yes, I did witness the guy running on stage as The Carters walked off stage. From my view point (in the 100 level seats) it simply looked like the dancers were running to exit the stage. It wasn’t until I got home that I realized what happened and it wasn’t until today that I realized I had it on video. I’m happy no one was hurt, but I’mma need them to up security! 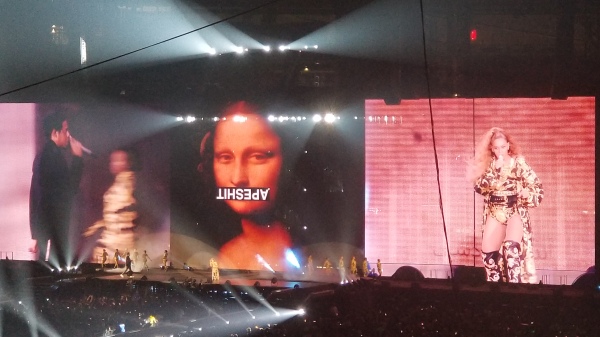 If they haven’t come to your city yet, GO! I recommend the same for Justin Timberlake as he’s on tour til next year! I might go back a do a review on the Man of the Woods Tour, but that was back in May.

Check out my photos and video on IG! And come back tomorrow to see my outfit!

5 replies to Worth Every Penny: On the Run II

Do you have one of the new @olisohome mini irons? If so, you can now get a matching full size iron. If not, grab both now!
All of today's looks are serious throwbacks. I make all of the items worn here. (minus the shoes)
This was a hit when I first made it. I self drafted this cape and added it to M6886.
I had to dig way back to 2015 for this make!
Thank you @pin.therapy!!!
Starting off violet week with this throwback which is really sorta indigo, but I didn't include it in blue week so....