Since I shared my review of my On The Run II concert I thought I’d do the same for the 24K Magic Tour that I attended the first of the month in Nashville. Let me start by saying I’m a fan of Bruno Mars, I love all his singles and I know a few B side tracks but I don’t follow his every move like say *cough* Beyonce *cough*.

I caught his first tour with Janelle Monet (Hooligans in Wondaland) back in 2011. I’m not sure why I missed his second one, the Moonshine Jungle Tour, but I definitely wanted to catch 24k Magic. When the first one leg of the tour was announced there was no Atlanta date. I decided to wait instead of buying tickets for the Charlotte show because I was SURE it would be added. Long story short, it wasn’t because Phillips Arena was under construction (still not sure why he couldn’t hit Infinite Arena). In his defense he did headline Music Midtown in September, but I’m not a festival person and I wanted the whole show not an abbreviated version. I say all of that to say that when he announced this last leg of the 24K Magic Tour my husband and I along with another couple were determined to catch him. So the four of us decided to attend the Nashville show.

I was so glad that my girlfriend snagged us floor seats (my luck with tickets this year has been awful)! My hubby doesn’t love sitting on the floor, preferring the raised seating of the lower bowl, but I think we had an awesome vantage point of the stage. I never once had to look up at the screens.

The show was fantastic! I don’t know what else to say, Bruno is a true performer. He is up there with Beyonce and Justin Timberlake for me when it comes to give a great live show. He belts out songs live while dancing and engages with the crowd. His band, The Hooligans, is amazing! They not only act as his background singers and musicians, but as his dancers and hype men. He doesn’t have the most elaborate stage (especially after watching OTRII and Man of the Woods earlier this year), but there were some special touches like a portion of the stage that raised and lowered during certain songs, a XXIV back drop for 24k Magic, the hanging lights that transformed the stage during the entire show and pyrotechnics….lots of pyrotechnics!!!

He started the show with a bang with Finesse, which was bitter sweet because we bought these tickets with the expectation of a Bruno/Cardi B show. Side note: Ellie Mai opened instead and while her vocals were on point, she needs a little more exposure to perfect her stage presence. He followed that up with 24k Magic, Treasure and Perm which kept the momentum up. He slowed it down later crooning Versace on the Floor and When I Was Your Man (during which he shed some tears) and Just the Way You Are. I will admit I was a little disappointed that he did not preform Gorilla or Grenade, both of which I love. Aside from those two I think he sang everything else Marry You, Runaway Baby, That’s What I Like, Chunky, Locked Out of Heaven. He even did a little medley of his features like It Will Rain and Nothing on You.

After about 90 minutes of non-stop entertainment the show ended with Just the Way You Are. Or did it? After the curtains came down the lights never came on so I waited… and then, as expected, they raised again for an encore performance of Uptown Funk which truly closed out the show.

If you’re a fan and ever have an opportunity to go see him, GO! He’s a heck of an entertainer. All four of us agree it was worth the price of the ticket and the trip to Nashville. I’m so glad the Bruno added this last North American leg to the tour. Rumor has it he won’t be touring again for a decade *GASP* If that’s true I’m thankful I managed to make this one. 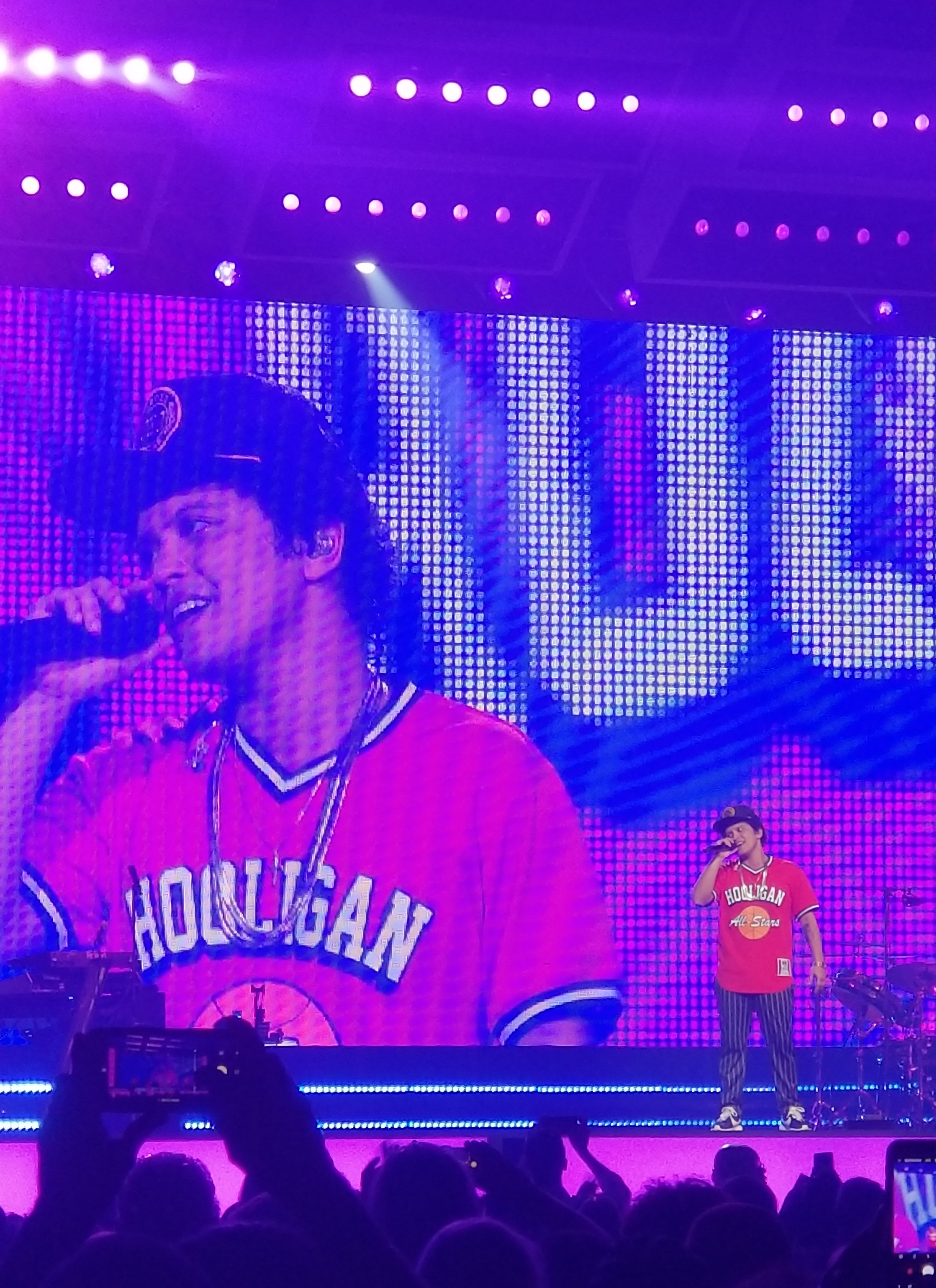 It’s been a great year for concerts! Thank God that even though I didn’t have any luck with ticket purchasing my concert buddy has, the four of us have seen Justin Timberlake, Jay-Z and Bey, and Bruno this year. It’s taking everything in me not to join them at the Drake w/Migos show, but our 2018 concert budget is blown. The only thing I may attend is the Jessie J show tomorrow night at Buckhead Theatre. I missed her the last time she was in Atlanta and I truly love her voice. Decisions…decisions….